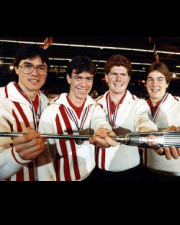 Allan A. “Al” Hackner (at left in picture, with his rink) was born in 1954 in Nipigon, Ontario. As an adult, Hackner moved to Thunder Bay, where he enjoyed his greatest curling successes. Nicknamed “the Iceman”, Hacker is a Canadian Hall of Fame curler, and two-time Brier and World Champion skip. He is of Ojibwa descent and is a member of the Red Rock Indian band.

In 1985, he defeated Pat Ryan of Alberta to win his second Brier. To win the game, Hackner had to make a near impossible double-take out, which would later go down in curling infamy as the “Al Hackner double”.