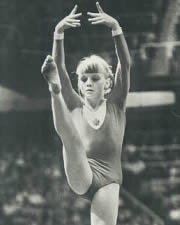 She has been referred to as Canada's Shirley Temple, Elfi Schlegel tumbled into the hearts of Canadians and eventually into the homes of North Americans. Schlegel was born to Swiss immigrants in Toronto, Ontario, and grew up in the Toronto suburb of Etobicoke, where she began gymnastics at the early