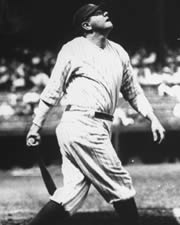 He also knocked a three-run homer over the right field fence. Nobody knew that young George Herman “Babe” Ruth would go on to hit a record 714 major league home runs.

And it all started on a September night on Toronto’s Centre Island, where Babe hit his first professional 4-bagger.