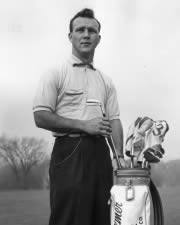 Perhaps no figure in the history of golf injected more excitement into the game over a sustained period than Arnold Palmer. Palmer’s ability to win with boldness and charisma was the single biggest factor in the game’s explosive growth after 1960. For people born in the second half of the 20th century, it was as if Arnold Palmer invented golf. The kickoff for his emergence as a superstar was the 1955 Canadian Open victory at the Weston Golf & Country Club.

Palmer has won numerous events on both the PGA Tour and Champions Tour, dating back to 1955. Nicknamed “The King,” he is one of golf’s most popular stars and its most important trailblazer, because he was the first superstar of the sport’s television age, which began in the 1950s. He went on to win 62 PGA Tour Events, 7 Major Championships, 10 Senior Tour Tournaments as well as many other wins. Palmer won the PGA Tour Lifetime Achievement Award in 1998, and in 1974 was inducted into the World Golf Hall of Fame.