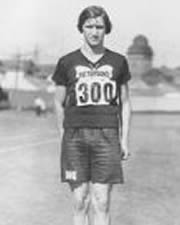 Called Bobbie for her “bobbed” haircut, Fanny (“Bobbie”) Rosenfeld was born December 28, 1904, in Dneipropetrovsk, Russia) Her family then immigrated to the small town of Barrie, Ontario when she was just an infant. was a Canadian athlete, who earned a gold medal for the 400 metre relay and a silver medal for the 100 metre at the 1928 Summer Olympics in Amsterdam. She was called the “best Canadian female athlete of the half-century” and a star at basketball, hockey, softball, and tennis.

Rosenfeld was honored nationally in 1950 when a press poll of sportswriters voted her Canada’s Female Athlete of the Half-Century. She was among the first to be inducted into Canada’s Sports Hall of Fame, and her legend has carried on long past her death at the age of 65 in 1969. With the recent appearance of her portrait on a Canadian postage stamp, the tributes to her continue today.