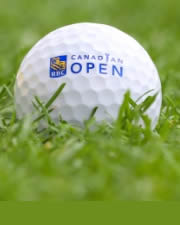 It was first played 116 years ago in 1904, and has been held annually since then, except for during World War I and World War II. It is the third oldest continuously running tournament on the tour, after The Open Championship and the U.S. Open. It is the only national championship that is a PGA Tour-managed event.

In the mid-1990s, the RCGA decided to move the championship around the country, and continues to alternate between Glen Abbey and other clubs. A Canadian has not won the RBC Canadian Open since Pat Fletcher in 1954.