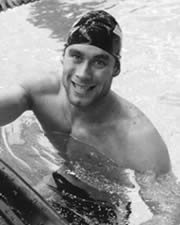 Talk about intensity in an athlete. Take the late, great Victor Davis, one of Canada’s most legendary swimmers, and one of the latest inductees into the Ontario Sports Hall of Fame.

“The one thing I can think of that would depict Victor’s character as a competitor is the one from the 1984 Olympics,” recalled former teammate Alex Baumann, himself a member of the OSHOF. “Victor was narrowly beaten in the 100-metre breaststroke on the first day. He was very disappointed with the result even though he did his best time by a considerable margin. “It is my feeling that this result, however, spurred him on to bigger and better things for the 200-metre breaststroke. You could tell before the race that no one was going to beat him. He demolished the field in the first 100 metres and broke the world record by over one second – a record that stood for many years.” Typical of Davis, a defeat, according to Baumann, was just a temporary setback. The loss (well, he still captured the silver medal) in the 100 just made him more intense and more determined to win a gold in the 200.

Davis’ roots were in Guelph with the Dolphins Swim Club. Davis was the winner of seven Canadian national swimming titles and holder of seven Canadian, four world and one Commonwealth Games record. He was also a member of the 4×100 medley-relay team at the 1984 Olympics. “The other story I can think of is one that happened about two weeks prior to the ’84 Olympics at a training camp in San Diego,” Baumann reflected. “Victor sprained his ankle after a workout. Everyone thought that this would be an impediment to his preparation. “The fact that the injury healed very quickly proved to me that the mind is stronger than the body. He was so determined to compete and win at the Olympics that he wouldn’t let anything get in the way of that goal. An injury like that for most people would have upset preparations.”

Davis was killed in a traffic misadventure in Ste. Anne-de-Bellevue, Que., on Remembrance Day, 1989. Davis’ brain was damaged beyond repair and in the end, he donated his heart for an organ transplant.