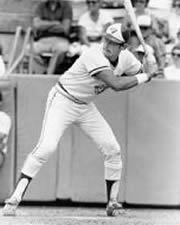 Leo Ernest “Ernie” Whitt (born June 13, 1952 in Detroit, Michigan) is a former Major League Baseball catcher and coach who is the current manager for the minor league Clearwater Threshers. He is noted for the twelve years he spent as a player with the Toronto Blue Jays. When he left the team following the 1989 season he was the last original Blue Jay left from when Toronto joined the major leagues in 1977.

Whitt was selected in the 15th round of the 1972 amateur draft by the Boston Red Sox, and he made his major league debut on September 12, 1976. With his path to the majors blocked by future Hall-of-Famer Carlton Fisk he was left unprotected during the expansion draft that transpired after the 1976 season, and was selected by the Toronto Blue Jays.

Whitt spent most of his time in the minor leagues in the first few seasons; Whitt speculates in his autobiography that Blue Jays manager Roy Hartsfield had a low opinion of his potential, as most of the catching duties went to Alan Ashby and Rick Cerone. With Hartsfield’s departure prior to the 1980 season, new manager Bobby Mattick believed in Whitt’s ability as a player, and Whitt remained with the club for the next ten years.

During the 1980s Whitt had his best years, putting together some very productive seasons despite spending most of this time platooning with Buck Martinez. In 1985, he hit .245 with 19 HRs and 64 RBIs. In 1987, he bettered himself to .269 (a career high), 19 HRs and 75 RBIs (also a career high). Due to his longevity as well as his good numbers, he is widely regarded as the Blue Jays’ greatest catcher of all-time.

The Blue Jays’ fan support was at a peak during Whitt’s tenure, and he became one of the more popular players; fans at Exhibition Stadium frequently chanted his first name when he stepped into the batter’s box, an event which was captured in a commemorative Ernie Whitt bobblehead issued by the team in the first decade of the Twenty-First Century.

Whitt parlayed his popularity into the publication of an autobiography “Catch: A Major League Life,” providing an insider’s glimpse into both the 1988 season and Whitt’s early days coming up through the minors. The book includes adventures such as entering bowling tournaments to win money for food. The book also caused a stir upon publishing due to Whitt’s controversial labeling of umpire Joe Brinkman as “incompetent.”

Following the 1989 season, Whitt was traded to the Atlanta Braves to make room for young catchers Pat Borders and Greg Myers. After a year in Atlanta and a further half-season with the Baltimore Orioles, Whitt retired at age 39.

Given his years of promoting baseball in Canada while a member of the Blue Jays, Whitt remained active as an ambassador of Canadian baseball, eventually taking out Canadian citizenship. Indeed, Whitt’s coaching career first came to prominence in his capacity as manager of the Canadian national baseball team. In the 2004 Summer Olympics in Athens, he guided the team to a 4th-place finish in the baseball tournament. Whitt also managed the Canadian national baseball team to a 3rd place finish in Pool B at the 2006 World Baseball Classic.

Whitt also served as both the Blue Jays’ bench coach and first base coach starting in 2005, and was rumoured to be a potential replacement for then-incumbent manager John Gibbons until Gibbons and several coaches were fired midway through the 2008 season. He is currently the manager of the Clearwater Threshers in the Philadelphia Phillies’ minor league system.