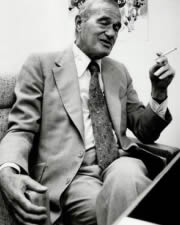 Lewis Edward “Lew” Hayman (September 30, 1908 – June 29, 1984) was one of the driving forces behind the Canadian Football League as coach, general manager, team president, and league president. As head coach, he was a five-time Grey Cup winner with three different teams. Hayman was a pioneer in bringing African Americans into the CFL, hiring professional football’s first Black player, Herb Trawick and coach Willie Wood.

Hayman was born in New York City and grew up in Paterson, New Jersey. He attended New York Military Academy and was a star basketball player at Syracuse University, where he was a three-year starter and named College Humor third team All-American in 1931. He also played for the Syracuse football team.

After graduating, Hayman moved to Canada in 1932 to become assistant coach of the University of Toronto football team under Warren Stevens. He was soon also hired as an assistant to coach Buck McKenna with the Toronto Argonauts football team. When McKenna took ill during the 1932 season, Hayman became interim head coach. He was given the job outright for the 1933 season and, at the age of 25, guided the Argonauts to a Grey Cup championship. He followed that with back-to-back Grey Cup wins in 1937 and 1938. With World War II escalating, the major Canadian football leagues halted operations following the 1941 season and Hayman joined the Royal Canadian Air Force as a flying officer. He was made coach of Toronto’s RCAF football team and led the Toronto RCAF Hurricanes to the 1942 Grey Cup championship. He was discharged after the war, having reached the rank of flight lieutenant. Hayman thought he had an agreement with the Argonauts to return as head coach when play resumed in 1945, but the deal fell through and Ted Morris was hired instead. That left Hayman with bitter feelings toward his former team—which admitted that they had misled him—and Hayman had to settle for a job as coach of the Toronto Indians football team. One of the members of the Indians was future CFL commissioner Jake Gaudaur, who had also played under Hayman in the RCAF.

The following season, Hayman partnered with Eric Cradock and Leo Dandurand to form the Montreal Alouettes CFL team, with Hayman as head coach and general manager, as well as part-owner. In his first season, he broke the league’s color barrier by signing Herb Trawick, an African American lineman. Other innovations introduced by the Alouettes under Hayman were playing night games, scheduling games on Sundays, and allowing games to be televised. During the off-season in 1946, Hayman became general manager of the Toronto Huskies professional basketball team, the first Canadian-based team in what evolved into the National Basketball Association (known at the time as the Basketball Association of America). When the team’s first coach quit a month into the season, Hayman took his place for one game, and is in the record books as having been an NBA coach for that single game. The Huskies disbanded after one money-losing season. Hayman led the Alouettes to their first Grey Cup in 1949—Hayman’s fifth and final Grey Cup as head coach. Following the 1951 season, Hayman stepped down as coach but continued as general manager until the end of the 1954 season, when he sold his share of the Alouettes and moved back to Toronto to become a stockbroker.

Hayman was elected to the Canadian Football Hall of Fame in 1975. The CFL award presented to the outstanding Canadian player in the East Division is called the Lew Hayman Trophy. In 2004, he was inducted into the International Jewish Sports Hall of Fame.