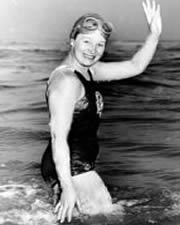 Marilyn Bell Di Lascio, Order of Ontario (b: October 19, 1937, Toronto, Canada) is a retired Canadian long distance swimmer, born in Toronto. She was the first person to swim across Lake Ontario and later swam the English Channel and Strait of Juan de Fuca.

On September 9, 1954, Bell started her swim across Lake Ontario from Youngstown, New York to Toronto at virtually the same time as world famous American long-distance swimmer, Florence Chadwick. The Canadian National Exhibition (CNE) in Toronto had offered Chadwick $10,000 to swim the lake as a publicity effort for the annual exhibition. Bell, who felt the offer snubbed Canadian swimmers, took on the challenge without pay. After several hours, Chadwick was forced to give up with stomach pains and vomiting while 16-year-old Bell became the first person ever to swim the thirty-two-mile (52 km) distance when she arrived in Toronto the next day. (A third swimmer, Torontonian Winnie Roach, also attempted the swim at this time but failed.)

Bell swam for 20 hours and 59 minutes under grueling conditions before she finally reached a breakwater near the Boulevard Club, west of the CNE grounds. The planned route straight across the lake was 51.5 km (32 mi), but she actually had to swim much further because of strong winds and the lack of modern navigation equipment. Waves that day were almost 5 m high, (up to 15 ft), water temperature was 21 °C (65 °F) and lamprey eels were attacking her legs and arms.

Bell kept up her strength with Pablum, corn syrup, and lemon juice with water, along with heroic encouragement from her boat crew and her coach, Gus Ryder. Radio stations broadcast hourly reports of her progress and rival newspapers published “extra” editions throughout the day. When she finally arrived at about 8:15 p.m., a crowd of 300,000 people gave her an emotional welcome at the Sunnyside waterfront.

The CNE decided to give Bell the $10,000 prize and Bell was later given numerous gifts including a car, television, clothing and furniture.

In 1955 she became the youngest person to swim the English Channel and in 1956 she swam the Strait of Juan de Fuca off the Pacific Northwest coast. She retired that year from swimming.