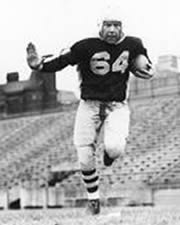 Born in Barrie, Ontario, Storey was working in a rail yard when he received an offer to play football with the Toronto Argonauts. He was on the team for six seasons from 1936 to 1941, winning the Grey Cup in 1937 and 1938. In the 1938 Grey Cup, Storey scored three touchdowns in twelve minutes (all in the fourth quarter) of the 1938 game to give the Argos the victory. After his performance, he received offers from the New York Giants and the Chicago Bears of the National Football League, but he declined. He was forced to retire after suffering a knee injury. At the same time he was playing football, Storey was also playing competitive lacrosse. In the Ontario Lacrosse Association, he played for Orillia and was an all-star with the Hamilton Tigers in 1941. Storey was also a prominent senior men’s baseball player and received an offer from the Philadelphia Athletics of the American League.

As a defenceman, he played hockey in New Jersey for the Rivervale Skeeters in 1941. Storey then moved to Montreal and joined the Montreal Royals late in the 1941–42 season. He played lacrosse for Lachine in 1942 and 1943. He later joined the Montreal Canadiens lacrosse team, and was playing there in 1946.

By the mid-1940s, Storey—in addition to his regular job—was officiating football, lacrosse, and hockey games. He officiated for 12 years in the precursor to the Canadian Football League.

Storey became an NHL referee in 1950 and worked in the league until 1959. On April 4, 1959, he was officiating a playoff game between the Montreal Canadiens and the Chicago Black Hawks, which Montreal won—along with the series—scoring the winning goal with 88 seconds left in the sixth game. Chicago fans nearly rioted, and Black Hawks coach Rudy Pilous accused Storey of choking by not calling penalties against the Canadiens late in the game. Storey was scheduled to referee the final game in the series between the Toronto Maple Leafs and the Boston Bruins, but when an Ottawa newspaper reported that NHL president Clarence Campbell said that Storey had “frozen” on two calls that should have been penalties against the Canadiens, Storey immediately resigned. He never returned to the NHL. His career included 480 regular season games and seven consecutive Stanley Cup finals from 1952 through 1958.

He was popular with NHL players because he talked with them. Gump Worsley said of Storey in his autobiography They Call Me Gump: “When Red Storey was refereeing in the NHL, I used to ask him where he was going to get a beer after the game. He usually told me, too.”

Following his retirement from the NHL, Storey remained active in oldtimers’ games, worked as a TV commentator, and was a popular raconteur.