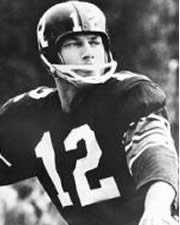 Russell Stanley “Russ” Jackson (born July 28, 1936 in Hamilton, Ontario) is a former professional Canadian football quarterback. Jackson spent his entire 12-year professional football career with the Ottawa Rough Riders of the Canadian Football League. He is a member of the Order of Canada, the Canadian Football Hall of Fame, and Canada’s Sports Hall of Fame, and has been described as the best Canadian-born quarterback to play in the CFL. In 2006, Jackson was voted one of the CFL’s Top 50 players (#8) of the league’s modern era by Canadian sports network TSN, the highest-ranked Canadian-born player on the list.

After a stellar college career as both a basketball and football player, Jackson graduated from McMaster University in 1958 with a Bachelor of Science degree in Mathematics. He was the McMaster nominee for a Rhodes Scholarship, but did not pursue an interview for the scholarship, deciding instead to sign with the Ottawa Rough Riders of the Canadian Football League, who drafted him in the first round of the 1958 CFL draft.

Jackson ended his career with 24,592 passing yards, with 1,356 completions on 2,530 attempts (53.6%), 125 interceptions, 185 touchdowns, and an efficiency rating of 90.83. He was also a mobile quarterback, gaining 5,045 yards on the ground on 738 rushes, with 54 touchdowns. Among the few Canadian-born quarterbacks to play in the CFL, Jackson is the only one to pass for over 20,000 yards. In fact, he is the only one to exceed 10,000 career yards. Other Canadians, such as Don Getty, Frank Cosentino, and Gerry Dattilio, are well behind Jackson in statistics. At the time of his retirement following the 1969 Grey Cup, he was third all-time among all quarterbacks in the CFL, behind only Sam Etcheverry and one-time teammate Ron Lancaster.