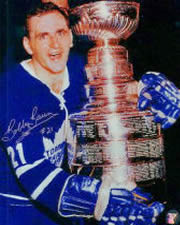 Bob “Bobby” Baun was born in Lanigan, Saskatchewan, September 9, 1936. Baun started with the Toronto Marlboros and then was assigned to the American Hockey League’s Rochester Americans.

Bobby Baun’s playoff heroics are what the Stanley Cup is all about, he played in the 1964 series against Detroit, took a shot off his ankle from Gordie Howe which broke it, however he continued to play and forced game 7, he played injured and won the Stanley Cup.

Baun was picked by the Oakland Seals in the 1967 Expansion Draft. After only one season in California, he asked to be traded back to one of the Original Six teams and the Seals complied, dealing him to Detroit, where he played for three years.