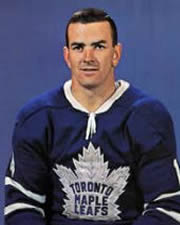 Dave Keon was born on March 22, 1940 in Noranda, Quebec. A clever skater and stick handler, Keon left St. Michael’s College to play professional hockey and joined the Toronto Maple Leafs for the 1960-61 season, scoring 20 goals to win the Calder Cup as the NHL’s rookie of the year. Keon won the Lady Byng Trophy for combining excellent play with sportsmanship in 1962 and 1963.

Dave Keon was inducted into the Hockey Hall of Fame in 1986.