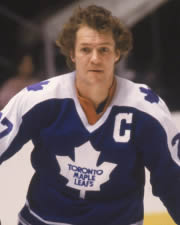 The 2012 Sandy Hawley Award Winner is Darryl Sittler. In the credit where credit is due department, Darryl Sittler wants to spread this honour around. Which is how come one of the most popular Maple Leafs that ever was is dedicating his Sandy Hawley Award to the folks who provide the heart, soul and backbone for all the charity organizations to which he lends his time – the volunteers.

“I’m just one small part of any charity,” Sittler was saying this past winter, on the day the Ontario Sports Hall of Fame announced its slate for today’s proceedings. “My name may help bring attention, but it’s all the volunteers who deserve the recognition.”

Sittler, too, though, has been utterly dedicated to assorted causes over the years. And while colon cancer has been of prime focus since 2002, when he lost Wendy, his wife of 30 years, the required selfless mind-set has been in place at least since the summer of 1980 when he plugged into Terry Fox’s Marathon of Hope.

“I wanted to meet him as much as he wanted to meet me,” Sittler recalled a few years back. They had run down University Avenue together to Toronto’s city hall and the crowd of 10,000 that finally let Fox understand that what he was doing mattered. “My opinion is that Terry Fox is the greatest Canadian ever. What he did is untouchable.” And Sittler has had a part in every annual Fox run since.

“We all have an opportunity to give back,” Sittler said, again at that Hall of Fame presser this past winter. “You can sit on the sidelines and do nothing or you can get involved. And when you get involved, it’s amazing what comes back to you.”