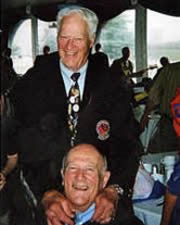 The 2010 Ontario Sports Hall of Fame event saw the inaugural presentation of the Sandy Hawley Award. This award recognizes a sports-connected personality dedicated to community service.

A former outstanding sports television cameraman, Mort for more than 30 years raised funds for both the Toronto Star and Toronto Sun Christmas funds, raising thousands of dollars annually for these worthy charities.

Famous for his thank you Christmas cards he would send to all those who contributed, Mort became an icon in the sports community, as he literally went from arena to arena seeking donations to help the kids at Christmas. He curled for many years in the Sportsmens Curling League at the Royal Canadian Curling Club, and in the past was a pretty good baseball player, for what was then called, the ‘Lizzies, Playground teams.

A very well deserved honour, the Ontario Sports Hall of Fame is proud to salute Mort Greenberg as the 2010 winner of the Sandy Hawley Award.

Congratulations, Mort, and thank you for your tireless efforts.